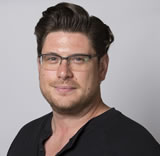 In 2008, I co-established the Sudbury, Ont-.based production company Nortario Films. In addition to producing my own films, I was the supervising producer on the internationally celebrated romantic drama “Two Lovers and a Bear,” directed by Kim Nguyen, which premiered in the Directors Fortnight section of the Cannes Film Festival and featured primetime Emmy Award winner Tatiana Maslany and BAFTA nominee Dane DeHaan. I am also a founding faculty member and professor at Laurentian University, in the Motion Picture Arts program. I co-founded the not-for-profit organization Northern Ontario Motion Picture Culture and Industry Development Corporation whose mandate is to develop and promote the film and television industry in Northern Ontario.

Q: What’s the number one thing you are working toward that you haven’t yet accomplished?
A: Having produced several feature films, I still haven’t produced a TV series, though I am currently developing one with three Northern Ontario comedians.

Q: What is the biggest obstacle you’ve overcome?
A: As a film producer, I am continually overcoming obstacles in order to successfully complete a production; however, the consistently biggest one is staying calm and collected as you lead a team of filmmakers through production.

Q: What are 3 things you can’t live without?
A: Family, friends and good food

Q: What would be the theme song of your life?
A: “Hakuna Matata” from The Lion King

Q: What is the most rewarding part of your job?
A: Building a creative, positive and fun work environment. Contributing to Northern Ontario’s community and helping future filmmakers develop their talent. Walking down red carpet premieres is pretty cool too.