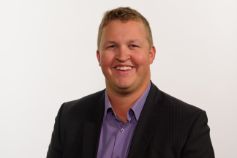 COOP has been in Sudbury since January, 2013 when he accepted the position as morning show host on 95.5 KFM.  He eventually became a weekend announcer on Pure Country (KICX) 91.7 in 2015, hosted the afternoon drive for a year, and has hosted Pure Country Mornings since February, 2017.  Being a hockey fanatic, COOP has also been the voice of the Sudbury Wolves, travelling fulltime with the team doing play-by-play for 2 seasons, and he now calls home games on radio and local TV.  Coop’s radio career began in North Bay (2010), when he was Promotions Coordinator & Afternoon Drive Announcer for 600CKAT.  Coop is married to his wife, Sarah.  They have 3 children!

It’s a dream of mine to do play-by-play at an NHL level!

Question 2 (Theme Song of my Life):

Question 3 (Most Rewarding Part of my Job):

Knowing how much of an impact our morning show has on people’s lives!  Being an announcer is an incredible opportunity I do not take for granted, and it’s an absolute privilege to be part of Sudburians’ daily lives, and to get their day started off in the best way possible.  We like to be real & share our own personal experiences on the air, in effort to connect with our listeners.  What’s also rewarding is seeing the community give back during our fundraising initiatives.

Question 4 (Something People Would Be Surprised to Know):

Growing up, I was actually the “quiet kid” in class & introverted.  Somewhere down the line, that changed, and I am somehow working in broadcasting! (And I love it!)

Question 5 (What Makes Me Proud to be a Sudburian):

I LOVE the fact that we are surrounded by beautiful lakes & scenery, and I’m convinced that people in Northern Ontario are the friendliest!  Also, being part of the Sudbury Wolves organization makes me proud!